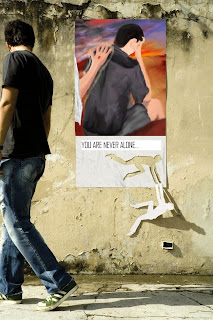 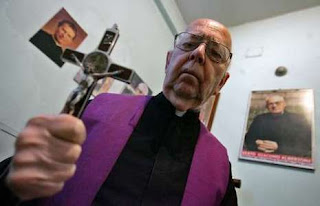 Don Gabriele Amorth is an exorcist in the diocese of Rome and the president of honour of the Association of Exorcists that he founded in 1990, and of which he was president until the year 2000. During his stay at Medjugorje in July 2002, he gave an interview to Fr. Dario Dodig.

Fr. Dario Dodig: Don Gabriele, you are exorcist in the diocese of Rome?

Don Gabriele Amorth: I am an exorcist in Rome and president of honour of the Association of Exorcists, which I founded. In the year 2000, we celebrated its 10th anniversary. I was 75 years old and I asked someone else to take over this duty. When Bishops are 75, they are retired, so I did the same!

Don Gabriele, would you be so kind as to tell us what is exorcism?

Exorcism is a public prayer of the Church done with the authority of the Church, because it is done by a priest named by the Bishop; it is a prayer for liberation from the demon, from the evil influence of the demon or of the evil provoked by the demon.

When we speak about exorcism, can you tell us how Satan can influence Christians?

The influence of Satan is immense. Satan acts in two different ways. The ordinary action of Satan is when Satan tempts men to evil. All men, from their birth to their death, are involved in this struggle against Satan who tempts them into evil. Jesus, because He had a human nature, submitted Himself to temptation coming from Satan. Except the ordinary action, Satan also acts in an extraordinary way, which consists in provoking malign troubles, which can go on until satanic possession.

When we speak about possession, how can we defend ourselves from Satan?

We have to first speak about prevention - what to do to avoid these evils. The measures of prevention are to live in the grace of God, to be faithful to prayer and not to do works that open the door to the demon, especially not to do any occult works. There are three main works of occultism: magic, spiritism and Satanism. The one who is dedicated to these things exposes himself to the extraordinary action of the demon.

Is the influence of Satan in the world of today stronger than before, especially his influence on the youth, for example through music?

Today, Satan has free hands. This does not mean that he has more power than in the past, but the door is wide open to him. Primarily, today we live in a period of little faith. It is purely mathematical: when faith declines, superstition grows. When we abandon God, we give ourselves to practices that open the door to Satan. There is no doubt that today’s media have done much in favour of Satan, first by the immorality of certain shows, the abundance of movies showing violence, horror or sex. Except this, media have put in the first plan and have given popularity to figures of wizards and magicians, and so they give publicity to their works.

Is the exorcism the highest degree of action against Satan? Are their other means that can come before this last degree?

Conversion! The first thing that we ask from people who come to us is to live in the grace of God, to be faithful to an intense sacramental life and to the life of prayer. After this, if it is necessary, we encourage them to receive prayers of healing and of deliverance, as they are practiced in the Catholic Charismatic Renewal. After a number of such prayers, the person is either already set free, or the need is evident to do the exorcism itself. Then we do the exorcism, keeping in mind that exorcism is a prayer where the result does not always come immediately. Sometimes, years of exorcism are needed for a person to be delivered.

Is the exorcism the highest form of action in the name of God?

Theoretically, yes. Nevertheless, we have to keep in mind other factors, which are very important before God. The exorcism is a prayer. Like all the prayers, it is the more efficacious the stronger the faith is. Faith has a fundamental importance. This is why we often read in the lives of saints that they have delivered people from diabolic possession without being exorcists themselves.

When we speak about Satan and satanic action, we usually have fear within us…

It is because we are not any more used to exorcism. Priests in general believe very little in the extraordinary action of Satan. If a bishop proposes to them to do the exorcism, they are frightened, as if they think: “If I leave the devil in peace, he will leave me in peace. If I fight him, he will attack me.” This is wrong. The more we fight Satan, the more he is afraid of us.

In her messages in Medjugorje, Our Lady says often that Satan is strong and she invites us to pray, to fast and to be converted.

Yes, this is true. In an Italian magazine, I had the occasion to comment on Our Lady’s messages where she speaks about Satan. She often spoke about this. She underlined that Satan is powerful and that he wants to destroy her plans. She invited us to pray, to pray, to pray.

In her messages, Our Lady spoke about the Rosary, about the Adoration of the Blessed Sacrament, about prayer before the Cross, and she said even that through prayer wars may be stopped.

Yes. Through prayer, we can even stop wars. I always understood Medjugorje as a continuation of Fatima. According to Our Lady’s words in Fatima, if we had prayed and fasted, there would not have been World War II. We have not listened to her and therefore there was a war. Also here in Medjugorje, Our Lady often calls to prayer for peace. In her apparitions, Our Lady always presents herself under another name to show the goal of her apparitions. At Lourdes, she presented herself as the Immaculate Conception, in Fatima as the Queen of the Holy Rosary. Here in Medjugorje, Our Lady presented herself as the Queen of Peace. We all remember the words “Mir, mir, mir” (peace, peace, peace) that were written in the sky at the very beginning of the apparitions. We see clearly that humanity is running the risk of war, and Our Lady insists on prayer and on Christian life to attain peace.

In her messages, the Queen of Peace also underlines fasting, which is a bit forgotten in the Church. She speaks about fasting according to what is written in the Gospels - that through fasting and prayer we can eliminate all influence of Satan.

This is true. First in Fatima and now here in Medjugorje, Our Lady speaks often about prayer and fasting. I think that this is very important, because contemporary men are following the spirit of consumerism. Humanity searches how to avoid any kind of sacrifice and so it exposes itself to sin. For Christian life, except prayer, we need a certain austerity of life. If there is no austerity of life, there is no perseverance in Christian life. I will give you an example - today, families fall so easily apart. They celebrate the wedding, but the couples divorce quickly. It happens because we are not used to sacrifice any more. In order to live together, we have to be able to also accept the deficiencies of others. The lack of spirit of sacrifice leads to the fact that we do not live Christian life in fullness. We see with what facility abortion is being committed, because of the lack of readiness to make a sacrifice to educate children. This is how the first reason of marriage is being destroyed. This is because there is no practice of making sacrifice. Only if we are used to sacrifice ourselves, we will be able to live Christian life.

The fruits of Medjugorje are numerous. Conversions are numerous. A theologian says that here, heaven came down on earth. Our Lady invites us to abandon ourselves totally to her so that she may lead us to Jesus. Isn’t this the essential for Christian life?

No doubt! Medjugorje is really a place where one learns to pray, but also to sacrifice oneself, where people are converted and change their lives. The influence of Medjugorje is worldwide. It is enough to think about how many prayer groups came about thanks to the inspiration of Medjugorje. I also lead a prayer group, which was founded in 1984. This group is already 18 years old. We live one afternoon as it is lived in Medjugorje. There are always 700 or 750 people. We always meditate on Our Lady’s message of the 25th of the month and I always read this message in relation to a sentence from the Gospel, because Our Lady does not say anything new. She invites us to do what Jesus thought us to do. Groups like mine exist all over the world.

Is it true that Medjugorje is a “big mouthful” for Satan?

Surely. Medjugorje is a fortress against Satan. Satan hates Medjugorje because it is a place of conversion, of prayer, of transformation of life.

Would you give us your advice?

The “testament” of Mary, her last words written in the Gospel, are “Do whatever he tells you”. Here in Medjugorje, Our Lady insists again that the laws of the Gospel are respected. The Eucharist is at the centre of all Medjugorje groups, because Our Lady always leads to Jesus. This is her main concern: to make us live the words of Jesus. This is what I wish to everyone. May the Immaculate intercede for you, so that the blessing of God may descend on all of you in the name of the Father, and of the Son, and of the Holy Spirit. Amen!

Thank you, Father, and may God give you a long life!
Gepost door The Guardian Angel om 23:46 Geen opmerkingen: 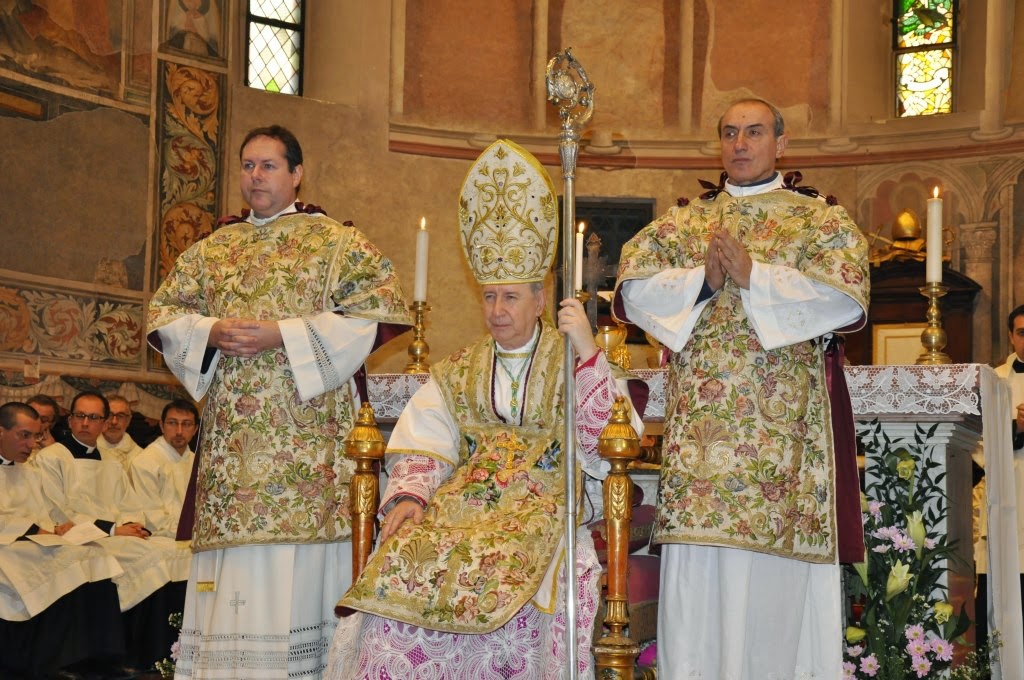 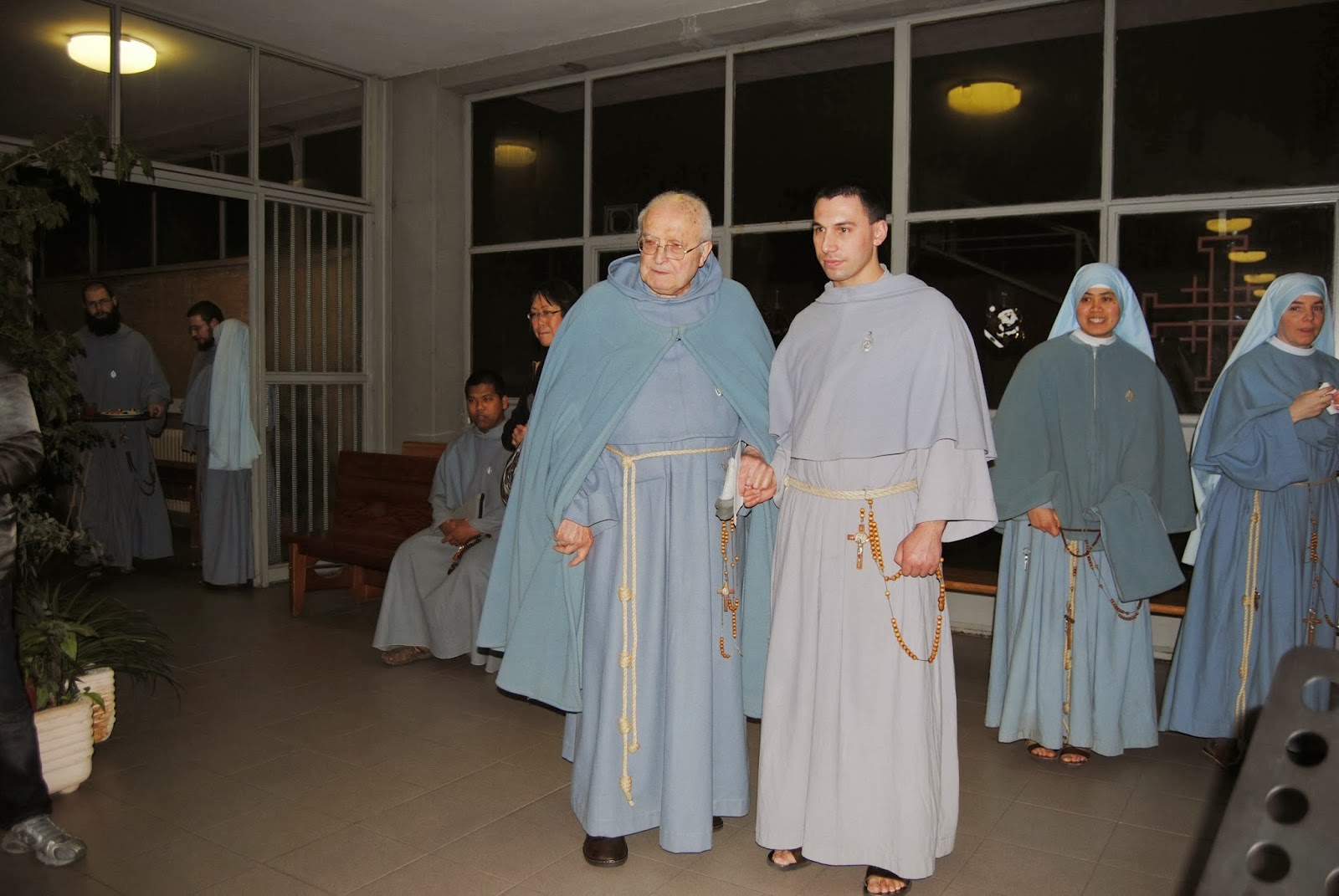 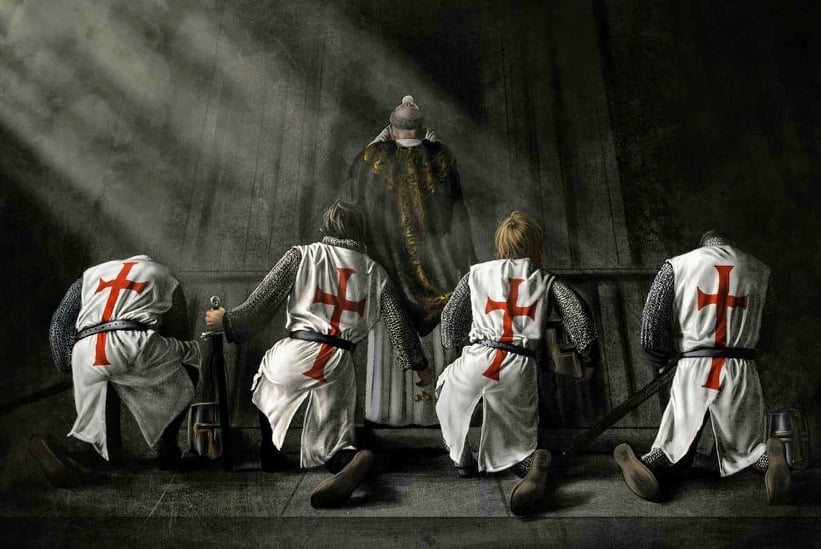 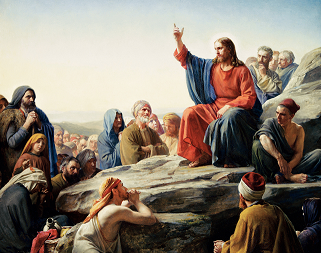 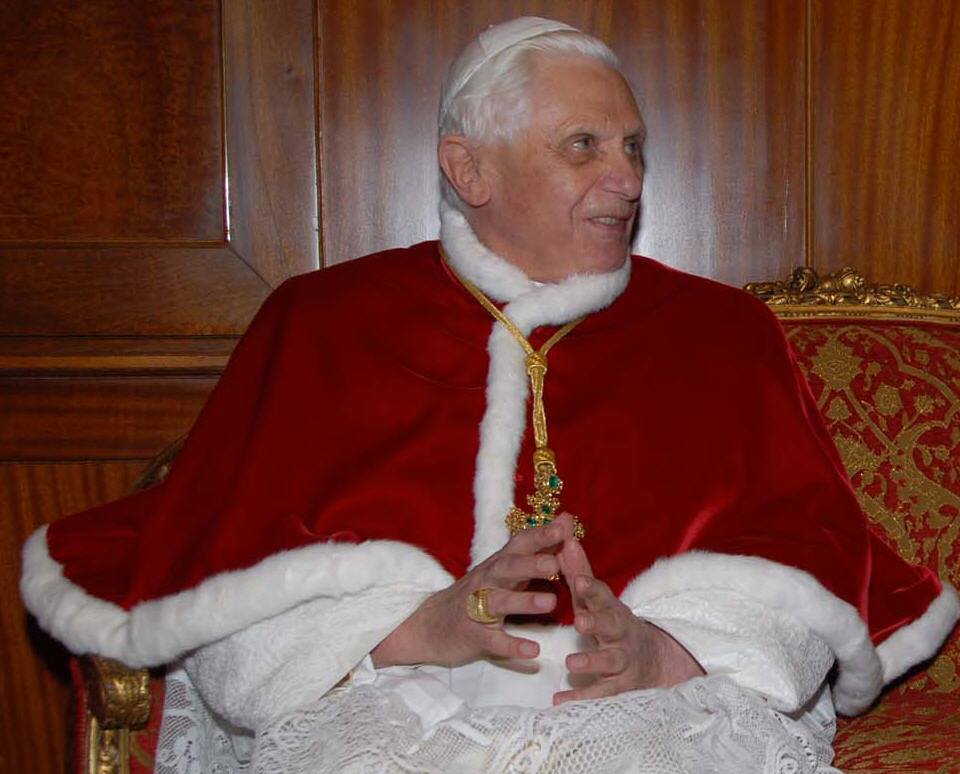 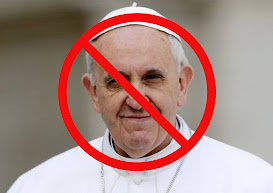 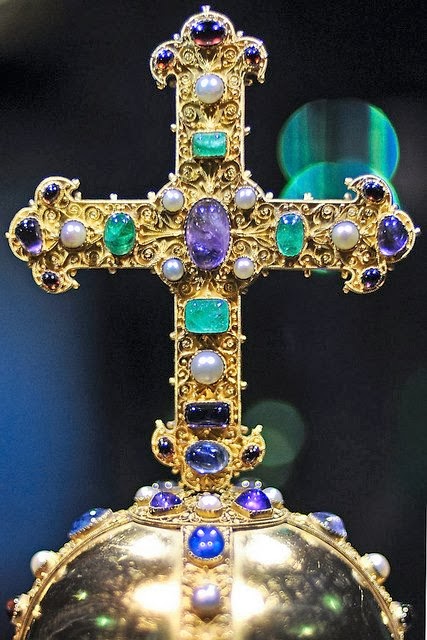 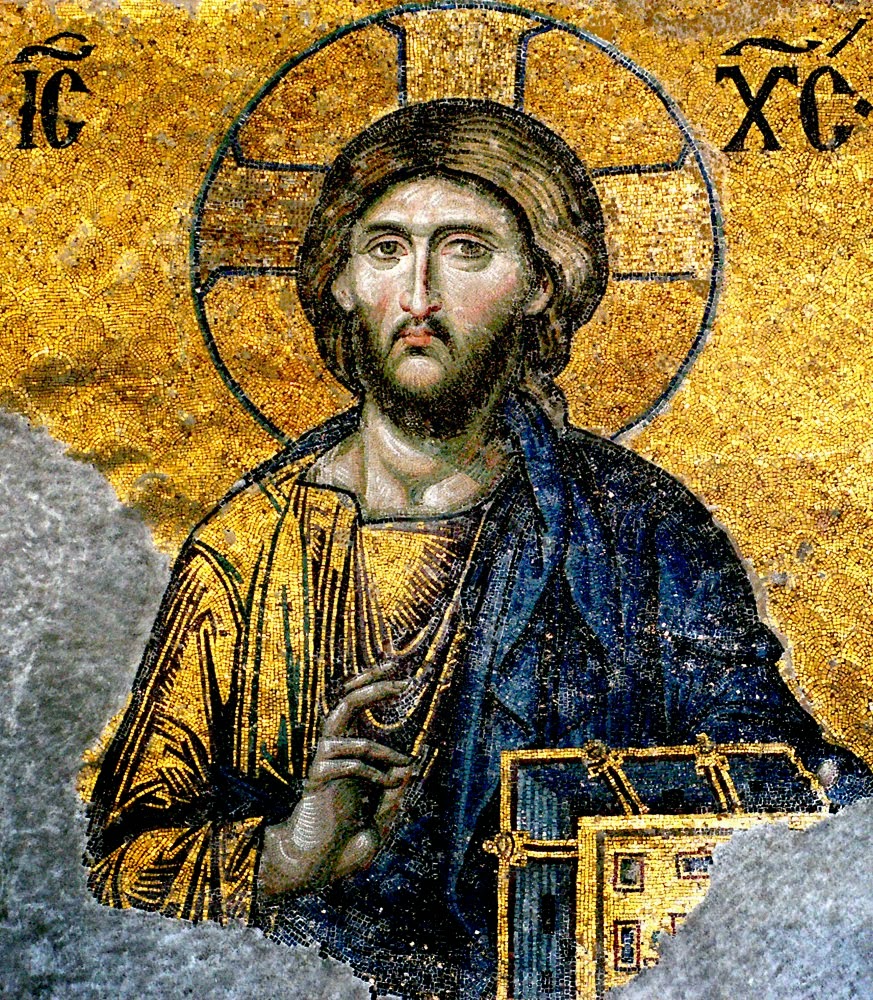 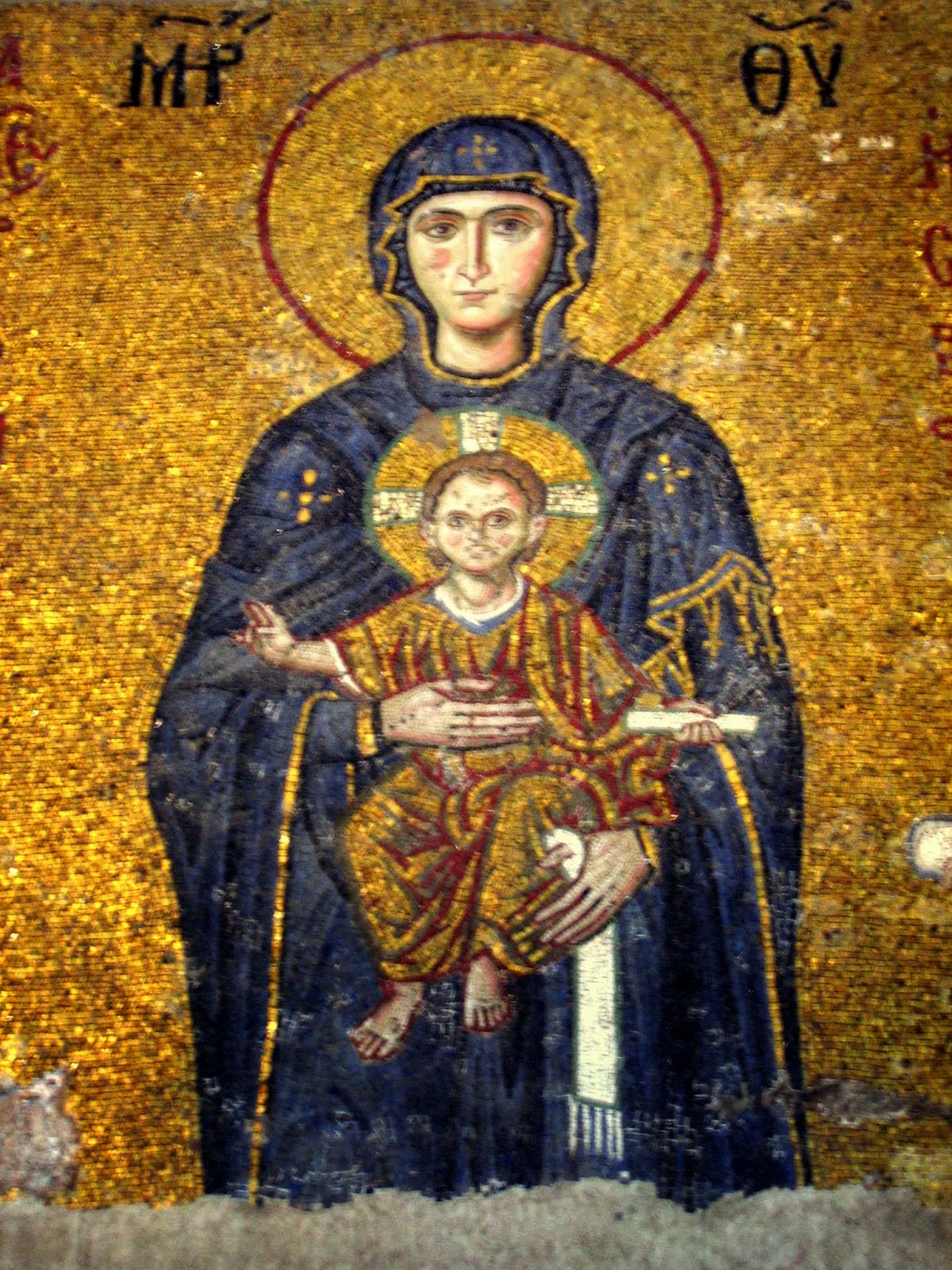 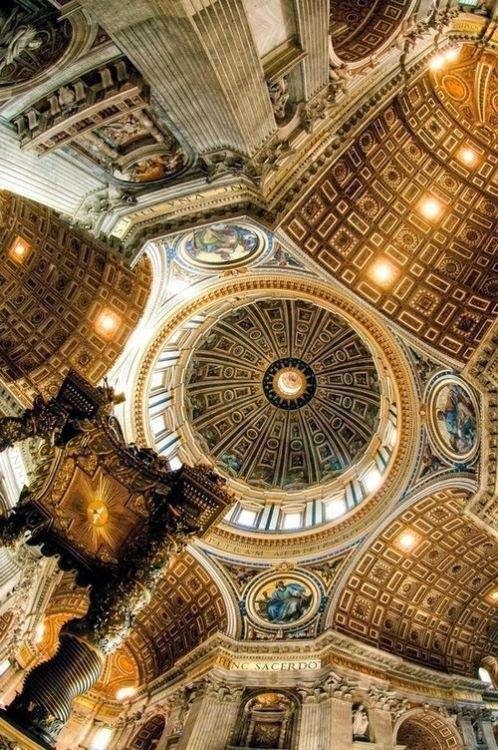 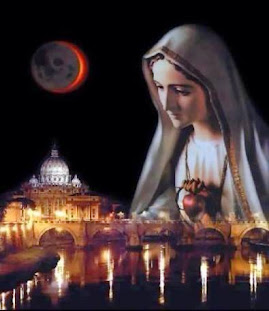 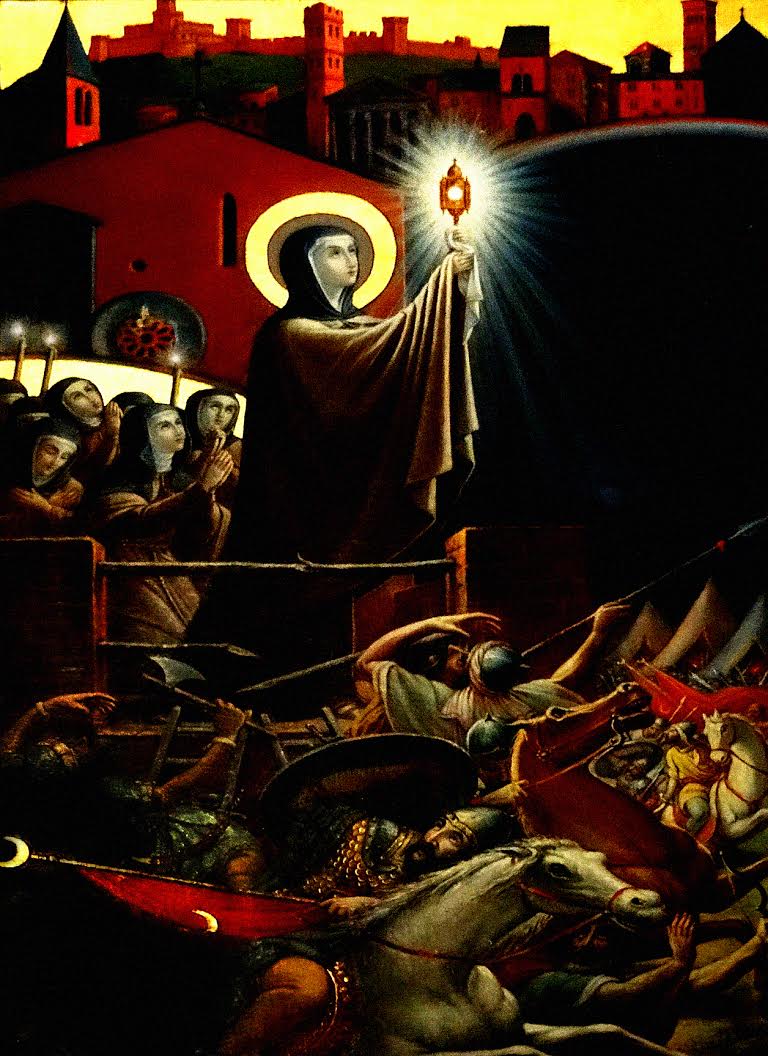 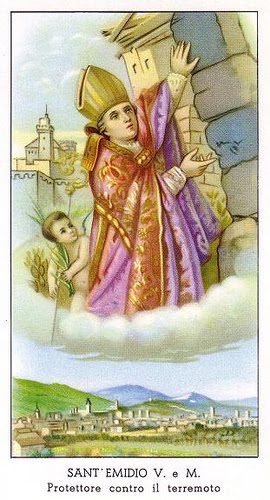 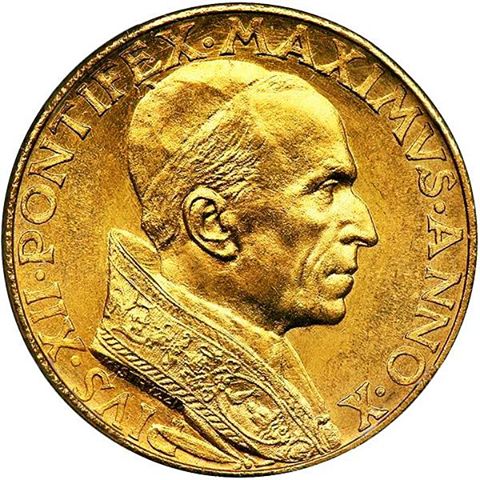 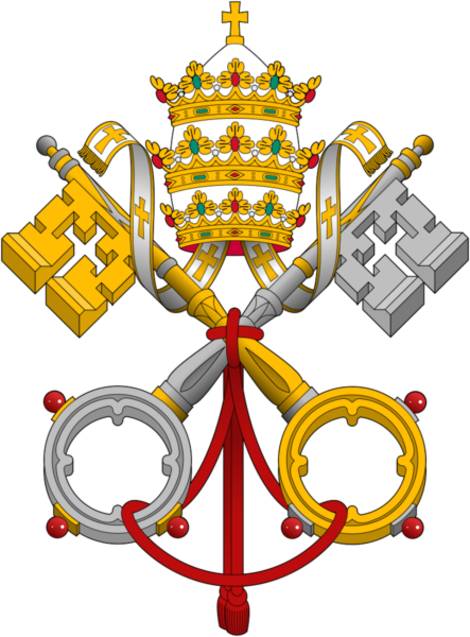 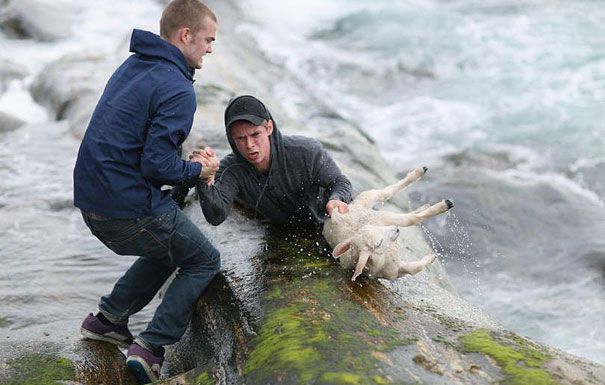 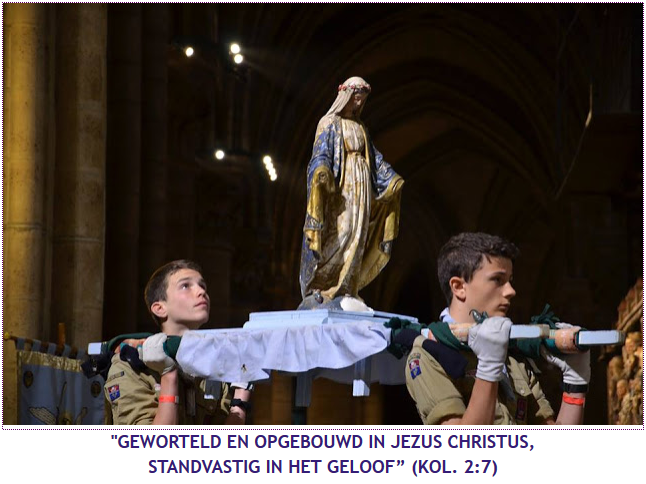 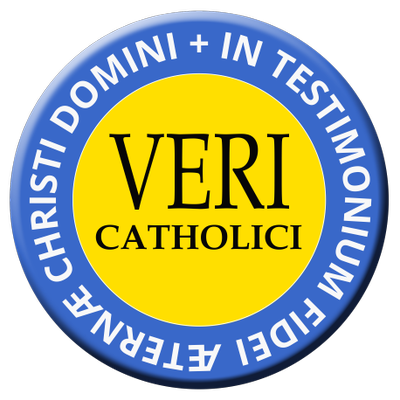